“The world is a book and those who do not travel read only one page.”  St. Augustine

These last two weeks have been full of expeditions of all kinds – physically and spiritually speaking!  Our world has definitely broadened by all our experiences. Since our dear brother, Kevin Turner, arrived on November 8th, we have walked over all kinds of terrain and through many kinds of experiences.  There have been peaks and valleys – physically and spiritually speaking – and we are grateful for it all.  It has been an opportunity to grow into Paul’s exhortation in Philippians 4:11-13 to learn contentment in every kind of situation and to see the grace of God strengthen us in it all.

Although some of the initial ministry plans fell through, there was not a lot of down time.  Jacob and Kevin were both eager to “dive in.”  The first few days were set aside to allow Kevin time to acclimatize and to go through and organize ministry supplies which he brought with him.  Kevin is generous and loves to ensure that we are equipped with every possible gadget that could assist us in the work we are doing.  His friendship and company is blessing to us all and the laughter (and tears) we share is a gift to us.

On Saturday, November 12th, Jacob, Samuel and Kevin traveled to Yumbe to meet with Charles and Omar and several Sheiks (to whom Jacob gave DA Carson’s book, The Gospel as Center [in Arabic], some carrots from our garden, and some medicines.)  It was a joy for them to strengthen a growing friendship, to love one another and to share the treasure of the Gospel with those who have not known such a precious gift.  During this visit, Jacob found out that the very life and livelihood of the Headmaster,a Christian, in a Muslim school was spared because of the dialogues with Imams and Sheiks that started up.  “At the right time”, which is how God always does things, the hearts of the Imams and Sheiks (who had control over who would be employed in the local schools) were softened towards Christ-followers through the gracious dialogues which were taking place.  This Headmaster, though his students were performing better than all others, was about to lose his job because he was a Christian.  “But God!…” 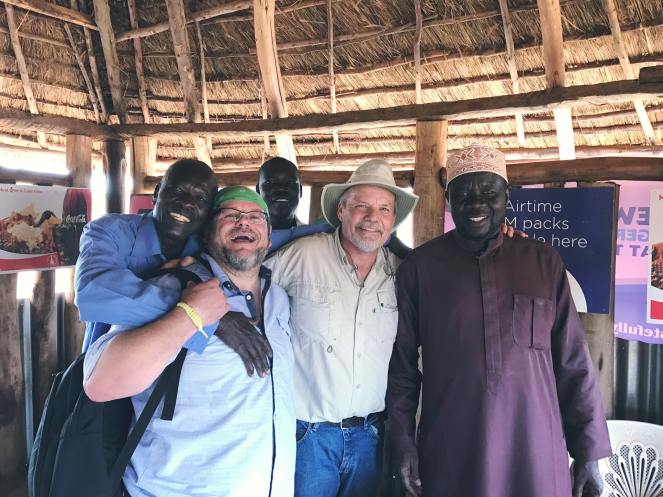 On Sunday, the 13th, we attended prayers (church service) at Ayaa Baptist Church, where brother Ojji Tobious is the lead pastor.  Pastor Tobious has done a wonderful job of shepherding this gathering of believers and of identifying and commissioning other faithful members to be sent out to share the Gospel and disciple the believers who are raised up in surrounding remote villages. It has been a joy to see how the pearls of the Gospel have been found and treasured in this gathering of believers. His church is one of the most notable in the area for taking seriously and following through on the discipleship process.  We were also honored to have a meal in the home of Tobious and his wife.

Tobious and his faithful band of brothers have now been equipped with Kindle Fires (that are loaded with the Jesus Film in several languages including Ma’di) as well as solar panel chargers which Kevin carried out for us and were also provided through the generosity of STBA (Study To Be Approved) which is the vision and passion of Delmar Hager.  These men have wasted no time in going home to home to show the Jesus Film (a depiction of the book of Luke) and to interact one on one with each family they meet.  Just today, Tobious posted on Jacob’s Facebook wall that each of the men who have received Kindles have been at work, doing the desired work of sharing this film with those over whom they have been given responsibility.  Their only complaint is that the screen is too small for many people to watch at one time.  We are trying to encourage smaller audiences so that it becomes easier to do one-on-one discipleship.

Where Jesus has asked them to go is no easy calling, no easy task. Having only been to some of these remote mountain villages a few times, our esteem for these “mountain preachers” has gone up considerably.  Not only are the climbs rigorous but the men are subjected to dangers and difficulties along the routes to each village where a new church has been planted.  We are grateful for the love and burden placed upon the heart of a dear sister who saw their need for sturdy shoes and a backpack and provided 9 sets of them.

On the 15th, Jacob and Kevin headed to the Metu Mountains again to minister to the believers in Lea and Oku.  The drive and hike are known to be hard, both on the vehicle and the body. It’s one of those park and hike (not park and ride!) places which takes it all out of you, but also gives back in terms of encouragement and hope and the knowledge that young believers are still persevering, they have been strengthened in their faith and have experienced the love of God through other believers who love them and are willing to go to them.

Wednesday evening, the 16th, Kevin was given the “hot seat” at the Moyo radio station (TBS, 98.6) to preach.  He did a wonderful job of encouraging and teaching the listening audience through knowledgeable interpreting by Emma.

On Thursday, the 17th, Jacob, Kevin, Emma and I, along with Tobious and some of his men, drove as far as we could and then parked and hiked to Alu Godu, another remote Metu Mountain village with no church. It was our first trip to Alu Godu.  It was a beautiful vista as we came around a bend in the path to see this lovely village sprawled out over a hill.  While we waited for the residents to finish their lunches and gather under a tree, we took a walk down a very steep path which leads to a stream.  This stream is their source of water until it dries up during dry season…and, then, they have to walk even further to fetch water. Unfathomable!  We are hoping that this might be one of the targeted areas for a bore hole and water hand pump.  One well cost $7500 to bore and set up. The only obstacle is that no passable road exists yet for a vehicles. This is something that the villagers and the local government will be working on.

After Kevin’s and Jacob’s messages some 40+ adults stood making their desire known that they wanted to trust in Christ alone for salvation…a new church was birthed! Jacob is currently working hand in hand with Pastor Tobious to make sure that we can have itinerant preachers come on the weekends until a shepherd is raised up from within or one moves there from one of the other new local churches in the Metu Mountains. Discipleship here and among the other new church plants is high on the priority list. 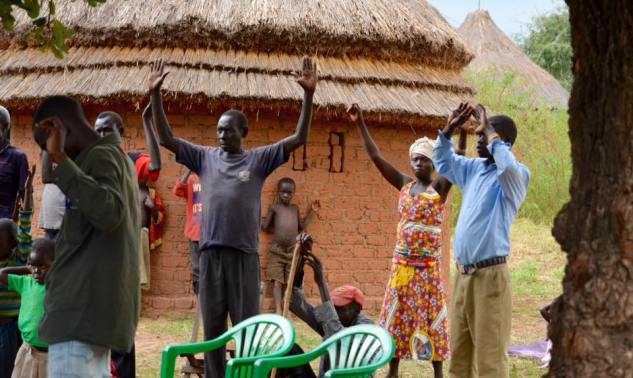 On the jarring ride back from Alu Godu, Kevin felt “something” in his lower back which didn’t cause him much distress until he woke up the next morning unable to move without spasms of pain.  This laid him low for the next couple of days and he was sad to miss out on our outreach to Yumbe on Sunday.

On Sunday, November 20th, Jacob, Pastor Henery and I went to Yumbe and worshiped with Pilgrim’s church and our dear friend, Charles.  Jacob preached from John 20:21 encouraging the congregation to be assured that Jesus has sent “them” just as He was sent and that they should take that commissioning seriously.  Shortly after the service, Jacob did a teaching (for those who were interested in reaching their Muslim neighbors) from 1 Peter 3:13-17, helping the listeners to understand not only the “what” of the Gospel, but the “how” of sharing it…with gentleness, respect and preparedness.  After a couple hours of leisure at a local guesthouse where we enjoyed a cold soda and a small snack, we packed up the vehicle with the many speakers and sound equipment and headed to the downtown Yumbe taxi park for open air preaching.  As usual, the youth of Pilgrim’s church did a great job of drawing a crowd with their energetic singing and dancing.

Jacob and Charles climbed on top of the Land Cruiser to deliver a rousing message and call to see who Jesus is as He described himself in John 10:1-18 (the Door, the Good Shepherd).  I enjoyed capturing all of these moments on camera as well as interacting with some of the women who were passing through but had stopped to listen for a moment.

Though Kevin still was experiencing pain on Monday, he was determined not to miss out on another event which was planned for Tuesday – the outreach to Oyo/Duku and Gbari/Arapi.  He did everything he could do to rest and stretch out his back, but in the end he was resolute that, no matter what, he was going! And he did!

On Tuesday, the 22nd, Jacob, Kevin and Mindra picked up Tobious and few other men and headed to the Metu Mountains again, this time to Gbari, Arapi, Oyo and Duku. Through the preaching and ministry done in Oyo, three more people professed their trust in Christ.  Pastor Tobious states that, now, around 45% of the people from Oyo are professing Christians and are meeting regularly as a church. Eighteen months ago there were none who were “born again”.  In Gbari/Arapi, the number of people gathering each Sunday has outgrown the tarp-covered meeting place.  A slab was poured a little over a year ago, along with the building of latrines and a small house for Pastor Geoffrey.  However, the money for finishing the actual church building ran out and so the people have been meeting under a tarp structure.  We would love to see the church building finished up.  It would not only make a protective area for the gathered church to meet, but it would also provide a covered area from which to do medical or other kinds of ministry.

Kevin and Jacob returned from their journey tired and stiff, but feeling encouraged that something significant is happening in those remote mountain villages.  It, once again, reminds us of why we need to focus our resources on the Bible School and getting that fully operational.  The Lord is at work and we must do our part to provide skilled leaders to guard and teach new believers.

Thank you all for your love, prayers and support! May the Lord bless you!

For those who have asked, small packages and letters may safely be sent to:

The greatest evil is having the gospel and not doing everything within our power to get it to those who do not have it. (Jacob Lee)

Tax deductible  charitable donations may  be made via PayPal.  PayPal also has a way to make reoccurring monthly gifts. To do so  please click their link below. PayPal deducts  a small amount from each gift as a processing fee. All gifts given through PayPal are now tax deductible as Reaching Africa’s Unreached has 501 c3 tax exempt status as a charitable organization.  If you wish to write a check you may write it out to R.A.U. and mail it to Lifegate Missions, 395 Lifegate Ln., Seguin Texas 78155.