“The priesthood of all believers and its relevance to Africa today” is a very important and timely blog post by African pastor Conrad Mbewe.  The messages and literature pastors receive from RAU also emphasizes this biblical truth.

The priesthood of all believers and its relevance to Africa today

In a previous blog post, I argued that the modern popular view of the pastor within Charismatic circles is simply another form of the traditional view of the village witchdoctor. It is full-blown African traditional religion that has returned dressed with a thin veneer of Bible verses made to say what the Holy Spirit never intended them to say when he first inspired the biblical writers to pen them.In this blog post, I am answering the question, “How can we bring down this popular unbiblical view and chase African traditional religion out of the church in Africa. How can we restore true Christianity to the African church?” It seems to me that this will only happen when we restore the New Testament teaching of the priesthood of all believers to the place it once held within Protestantism.The priesthood of all believers in history
“The priesthood of all believers” is a teaching that was particularly popularised by Martin Luther, the great reformer of the 16th century. Prior to the reformation in the church that he is known for, there was a very thick divide between the clergy (who were called “priests”) and the laity (the ordinary church members).

The priests were a specially trained and appointed group of people in the church who claimed to have special dealings with God. They alone could handle the Mass (an unbiblical form of the Lord’s Supper), baptism, weddings, and even prayers for the people of God. They mediated pardon too, and so God’s people came to them to confess their sins in order to receive God’s pardon. Through their mediation, the people of God could get their relatives who died outside Christ to cut short their period in purgatory (an unbiblical form of temporal hell).

In this way, the laity was totally dependent upon the priests in the church for everything…until Martin Luther came around. He showed that, according to the Bible, all Christians have equal access to God through prayer because all of them come to God through the mediatorial work of Christ. “For there is one God, and there is one mediator between God and men, the man Christ Jesus” (1 Timothy 2:5). Through the death of Jesus Christ, he has paid for the sins of all his people and so God accepts them on the basis of Christ’s merit alone. Christians do not need a human mediator to receive any blessing from God—none whatsoever!

The results of the loss of this teaching today
These biblical truths are what Christians on the African continent today need to hear. Those who claim that we need to go to them to get a “breakthrough” or “deliverance” in whatever situation we are going through are impostors, cheats, and swindlers. There is no longer an altar in the front for you to go to in order to be prayed for. The brothers and sisters sitting next to you in church—indeed you as well—have the same access to God as those charlatans calling you to the front.

It is because we have lost this truth of the priesthood of all believers that we have now created a very sleek class of “men of God” in Evangelicalism. In the name of having special spiritual powers (which they call “anointing”), these guys are milking the church of its money and sexually abusing its women. They wear costly designer suits, drive the most expensive cars, and own property that even chief executives of our biggest business corporations only dream of. They do not even carry their own Bibles. Like chiefs, they have henchmen to do it for them.

Every weekend and during conferences, they invite us to go to them for spiritual breakthroughs and deliverance. As Johan Tetzel told the people in Luther’s day to buy indulgences by putting money into his tin box and once coins hit the bottom of the box the souls of their dead relatives would spring out of purgatory, today’s “Tetzels” claim that your socio-economic breakthrough will be bigger if you give them more money. Thus the poor are getting poorer as they give them their earnings, while they are getting stinking rich. This is daylight robbery!

The one difference between the priests of the medieval era and today’s “men of God” is that the former often falsely promised a heaven after you die while the latter falsely promise you a heaven on earth while you still live. They invite you to their meetings in order for them to pray for you so that you get married or you get your loved one back who has run away with another man/woman. They say they will give you a breakthrough so that you get a job or a promotion at work. They claim that through their prayers you will get delivered from your persistent sickness or failure to conceive. They prey on the souls and wallets of men and women through the door of human greed. And thousands are falling for it.

We all have access to God through Christ
Yet the apostle Peter declared to all Christians, “You yourselves like living stones are being built up as a spiritual house, to be a holy priesthood, to offer spiritual sacrifices acceptable to God through Jesus Christ…. But you are a chosen race, a royal priesthood, a holy nation, a people for his own possession, that you may proclaim the excellences of him who called you out of darkness into his marvellous light” (1 Peter 2:5,9). In other words, if you have been saved from sin, i.e. brought out of darkness and into Christ’s marvellous light, you are part of a royal priesthood that has direct access to God. You do not need someone else to act between you and God. No, you can go and talk to God yourself. Period!

Every Christian is a priest to God. He has access to God the Father through Jesus Christ. The only barrier that any Christian can have in terms of his access to God is his own sins. If you are living in sin the Lord will not hear you. We read this in Isaiah, “Behold, the LORD’s hand is not shortened, that it cannot save, or his ear dull, that it cannot hear; but your iniquities have made a separation between you and your God, and your sins have hidden his face from you so that he does not hear. For your hands are defiled with blood and your fingers with iniquity; your lips have spoken lies; your tongue mutters wickedness” (Isaiah 59:1-3).

In this matter, there is enough evidence in the media today that these “men of God” who are claiming the powers to bring breakthroughs and deliverances in our lives are as steeped in sin and iniquity as the Herods of the Bible. As their wives sue them to court for divorce, we are discovering that while they were laying their hands on the innocent and unwary—and making them pay for this service—their wives were often catching them with their pants down behind closed doors. In outrage these women are now saying, “Enough is enough!” and letting the skeletons fall out of the wardrobes. Alas, these “men of God” are as corrupt as the Roman Catholic priests were in Martin Luther’s day—if not worse!” 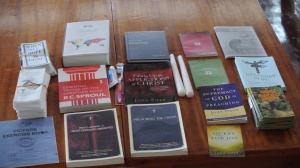 Some of the resources given to church leaders at RAU  retreats