“From Every People, Nation, Tribe and Tongue:  The Aringa” 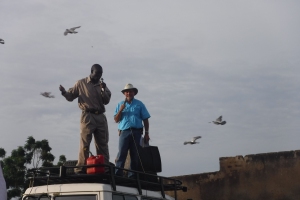 On Sunday, July 26th, Mindra, Zorah and I traveled to Yumbe and met up with Charles and the Youth/Choir from Pilgrim’s Church of Uganda.  Charles had written earlier in the week to say he had received an invitation from Muslims in Kulikulinga to come and preach the Gospel in their market place.  That was an invitation not to be turned down!  It was an experience not to be forgotten, either!  We, along with Charles and Pilgrim Church, had a fruitful and blessed time of ministry in this rural Yumbe District community and it was very evident that many intercessors heeded my urgent plea to fervently pray.

When we arrived we found we had been pushed to the edge of the center, which was not acceptable to us. The Lord blessed our efforts for a location change and gave us a great spot in the middle of Kulikulinga trading center for the open air preaching. This put us nearer to the Mosque and to a more busy spot. The Kulikulinga Mosque is huge and there are very few Jesus-followers in the community. There has to be a lot of outside money coming in to build such a  large Mosque in Kulikulinga.

The one-on-one we did before the open air went well, for the most, part with the Muslims. We used Aringa and Arabic gospel tracts in our interaction. Surprisingly, I met one of the Imams from our past two dialogues with Yumbe Imams and Sheikhs. The Lord used that “per chance” meeting to cause hesitant Muslims to listen to us! We invited each and everyone to attend the preaching later in the afternoon.

My text was from Mark 2:1-12 and it was proclaimed from a top the Land Cruiser. I used a number of Qur’anic texts to bridge into the Scriptures. Anything I had to say could not have had an impact apart from the help of a skillful interpreter and Charles did a most excellent job in interpreting. Those listening were well engaged in the message and all of us, as believers in Christ, sensed the presence of the Lord.

Afterwards, we showed the “Jesus” film for the first time in such a public setting in the native Aringa language…I still have chills as I think back to the very large crowd (estimated at 500+) that watched and listened attentively and interactively, (i.e. clapping, gasping, etc.). The Jesus film in the native tongue has been an effective tool in enabling people to have a clearer picture of who Jesus was (in history) and is. Thank you for your faithful intercession!!! According to Charles and other Aringa believers, less than 1% of Aringas are Christ-followers but the Lord is changing that!  He stated that this open air was the best ever he has been a part of.

Please continue in prayer that the Word planted in hearts would bear fruit! We gave out all the Aringa New Testaments we had with us.  We could have given 100 or more as the people wanted to be able to read the scriptures in their own tongue.

I am making an impassioned plea for help in buying more Aringa New Testaments!  Hebrews 4:12 states, “For the word of God is living and active, sharper than any two-edged sword, piercing to the division of soul and of spirit, of joints and of marrow, and discerning the thoughts and intentions of the heart.”   It is powerful and there is no substitute to getting the Bible into the hands of people to be read.  If you would like to help us buy more Aringa New Testaments (we have to buy them in Kampala) you can help via our donation page: https://reachingafricasunreached.org/donations/ Please make a notation the gift is for Aringa New Testament’s. Thank you!
May the Lord continue to make Himself known to the Aringa!

For those who have asked, small packages and letters may safely be sent to:

The greatest evil is having the gospel and not doing everything within our  power to get it to those who do not have it. May the Lord grant each of us His followers the wherewithal to be obedient disciples!  Jacob W. Lee

Tax deductible  charitable donations may  be made via PayPal.  PayPal also has a way to make reoccurring monthly gifts. To do so  please click the PayPal link. PayPal deducts  a small amount from each gift as a processing fee. All gifts given through PayPal are now tax deductible as Reaching Africa’s Unreached has 501 c3 tax exempt status as a charitable organization.  If you wish to write a check you may write it out to R.A.U. and mail it to Lifegate Missions, 395 Lifegate Ln., Seguin Texas 78155

2 thoughts on “From Every People, Nation, Tribe and Tongue: The Aringa”